The Kargil girl Janhvi Kapoor, recently caused a stir on Instagram by sharing a couple of pictures from her get-together with her girlfriends, but what caught the attention of her fans was her new tattoo handwritten in Sridevi’s handwriting.

Actress Janhvi Kapoor posted photos of herself flaunting her new tattoo on her hand. The tattoo is a note by her late mother, Sridevi, which says, “I love you, my labbu”. Interestingly, the tattoo is also written in Sridevi’s handwriting. 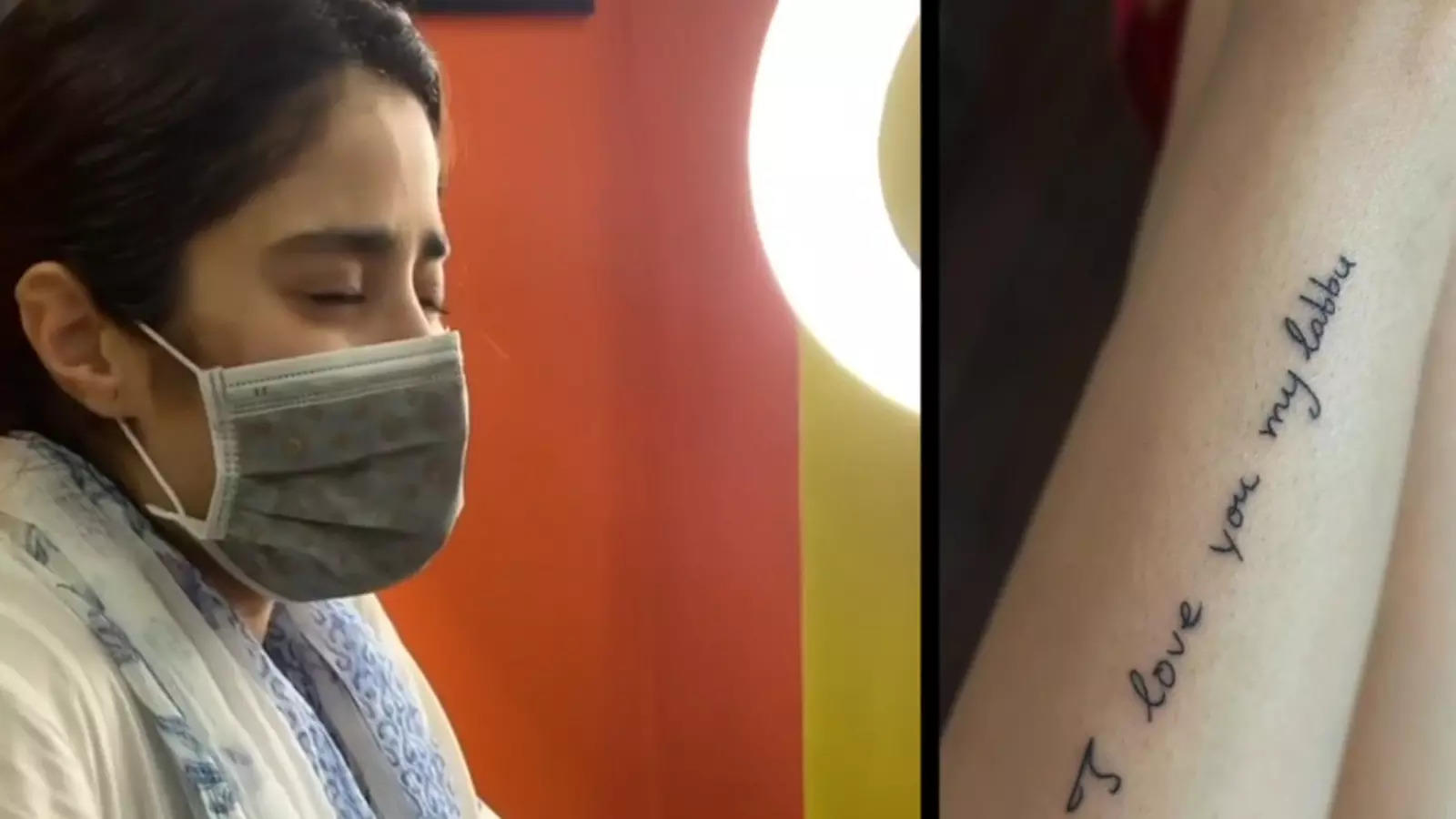 Janhvi uploaded a video of herself getting a tattoo on his hand that is trending on social media. In a chat show hosted by Neha Dhupia, Janhvi said Sridevi didn’t like tattoos.  However, on the anniversary of Sridevi’s passing, Janhvi just captivated the hearts of her followers by posting a photo of her tattoo. Janhvi Kapoor is an avid Instagram user who shares snippets of her workouts. We got a glimpse of her temple trips and outings to hilly locations in the other photos. Actress Janhvi Kapoor is the daughter of the late actress Sridevi and filmmaker Boney Kapoor. She made her debut with Dhadak, directed by Karan Johar. Talking about her family, her mother, Sridevi, was an Indian actress and film producer who acted in films in Telugu, Tamil, Hindi, Malayalam, and Kannada languages. Sridevi is regarded as one of Indian cinema’s greatest stars, and is frequently referred to as the country’s “First Female Star.” She married producer Boney Kapoor in 1996. Janhvi and Khushi are the couple’s two daughters. Sridevi and her youngest daughter, Khushi, flew to the United Arab Emirates on February 20, 2018, to attend her nephew’s wedding. Unfortunately, she took her last breath on February 24, 2018. Her fans were deeply saddened by her sudden demise.

In the same year, Janhvi’s debut film “Dhadak” was released. Janhvi’s father, Boney Kapoor, is an Indian film producer and has produced several hit movies like Judaai, Wanted, and many more. Boney Kapoor is the elder brother of the prominent actor, Anil Kapoor. Arjun Kapoor, a half-brother to Janhvi, is also an actor and made his debut in 2012 with Ishaqzaade. He is the nephew of Anil Kapoor. He was last seen in the movie ‘Bhoot Police ‘. Apart from this, famous actress and fashion diva Sonam Kapoor is Janhvi’s cousin. Talking about her films, Janhvi Kapoor was seen in “The Kargil Girl” and “Gunjan Saxena” by Dharma Productions.” The Kargil Girl is a biographical drama film directed by Sharan Sharma and produced by Dharma Productions and Zee Studios that will be released in India in 2020. Janhvi Kapoor plays Indian Air Force pilot Gunjan Saxena, one of the country’s first female fighter pilots (the first was Srividya Rajan), with Pankaj Tripathi and Angad Bedi in supporting parts. Janhvi was deeply appreciated for her role in the movie.

Janhvi was last seen in Roohi, a horror-comedy directed by Hardik Mehta and produced by Dinesh Vijan says Varun Sharma, Janhvi Kapoor, and Rajkummar Rao appear in the film. It was announced on March 29, 2019, and production began in Agra on June 14, 2019. In India, the film was released in theatres on March 11, 2021. The film’s confusing plot earned mainly poor reviews from critics. It has been dubbed one of the worst Hindi films of 2021 by publications such as The Indian Express. Janhvi has acquired a large fan base and upped the bar for her fellow competitors in the film fraternity in just a few years. She has succeeded in capturing the hearts of her fans. Khushi is the elder sister of Janhvi. Her upcoming movies are “Takht”, “Good Luck Jerry” and “Dostana 2”. Takht, directed by Karan Johar and starring Kareena Kapoor Khan, Alia Bhatt, Bhumi Pednekar, Janhvi Kapoor, Vicky Kaushal, Madhuri Dixit, Ranveer Singh, and Anil Kapoor, has supposedly been shelved at the moment.